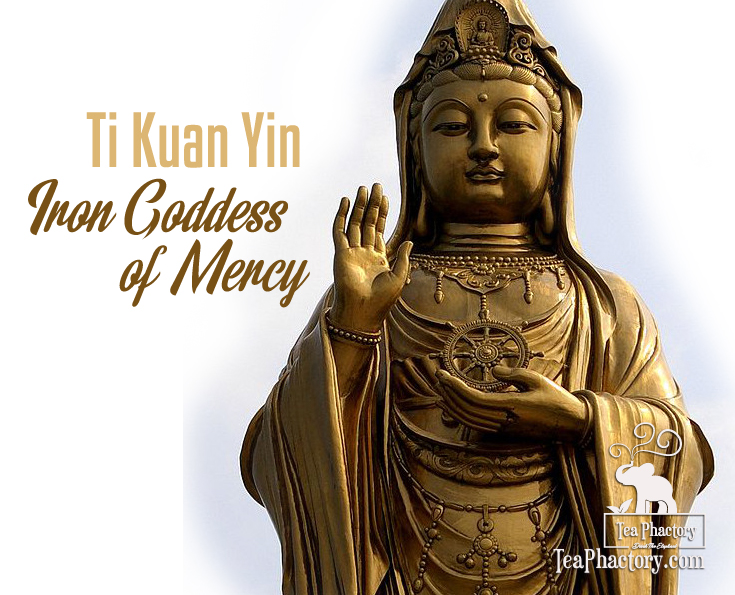 Ti Kuan Yin is one of the few teas said to have been created through divine inspiration. There are a few different versions of the story of Ti Kuan Yin.
My favorite version tells us that a poor farmer named Mr. Wei passed a temple on his way to work in the tea fields every day. The temple held an iron statue of the Buddhist deity Guanyin, a female bodhisattva of compassion, or Goddess of Mercy.

Mr. Wei observed that the temple was falling into disrepair and he wanted to do something about it. Being a poor farmer, Mr. Wei did not have the means to repair the temple. Instead, twice a month he brought a broom from his home to clean the temple and burned incense as an offering to the goddess.

Mr. Wei continued this for several months when one night the goddess came to him in a dream. To thank the farmer for cleaning her temple, she told him to look for treasure in a cave behind the temple. Mr. Wei looked in the cave the next day to find a single tea shoot which he nurtured and cultivated and soon it grew into a large bush. He shared cuttings of the bush with his neighbors. The community soon became very prosperous selling this fine tea under the name of Ti Kuan Yin, in honor of the goddess.

Today, Ti Kuan Yin Iron Goddess of Mercy is a premium variety of Chinese oolong tea, and is one of the most highly praised oolongs in the world.